Did a second playtest of the scenario and rules with 4 players, my wife, my cousin, and her husband and son.  We had 4 factions on the table this time:

The pace was fast a furious, here are a few photos.  It ended again with Doc Savage making off with the girl and the scroll of Thoth, but was a nice, close run thing.  Best quotes included:
All in all great fun, and I look forward to one or two more plays before Southern Front. 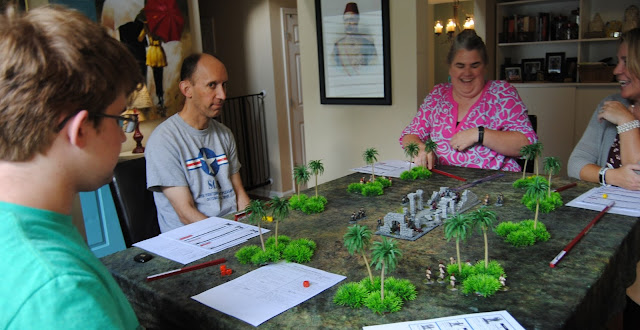 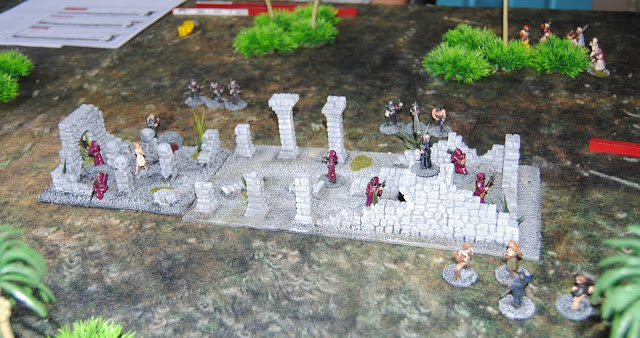 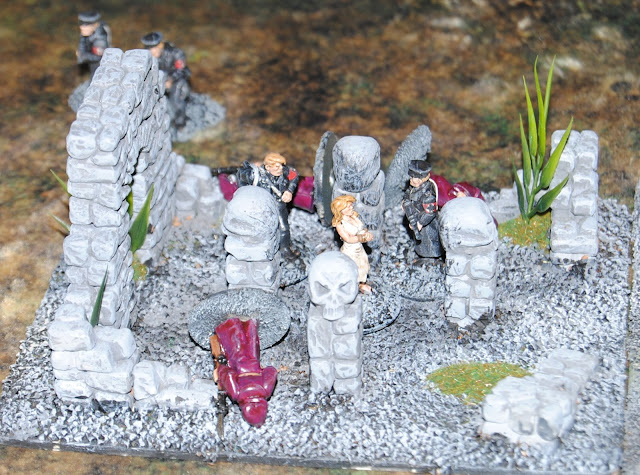 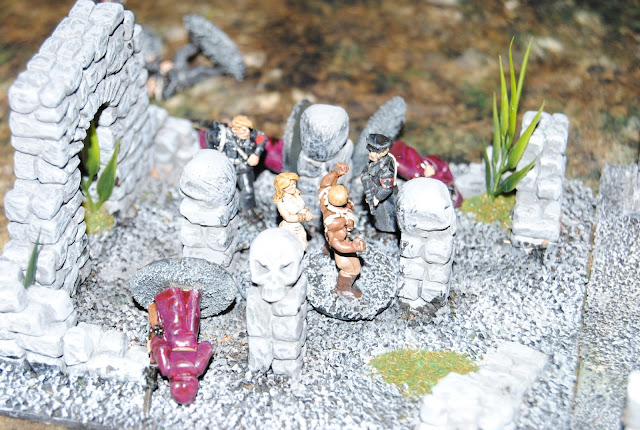 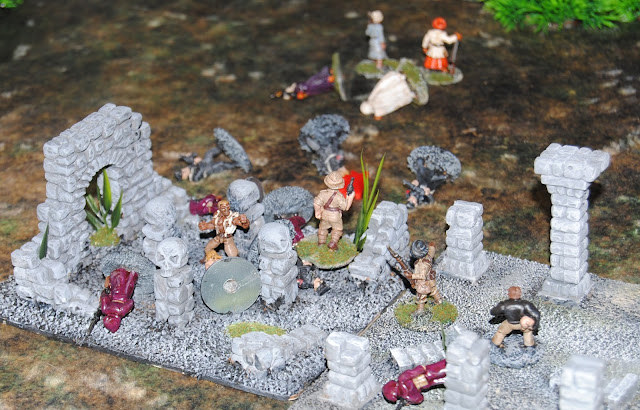 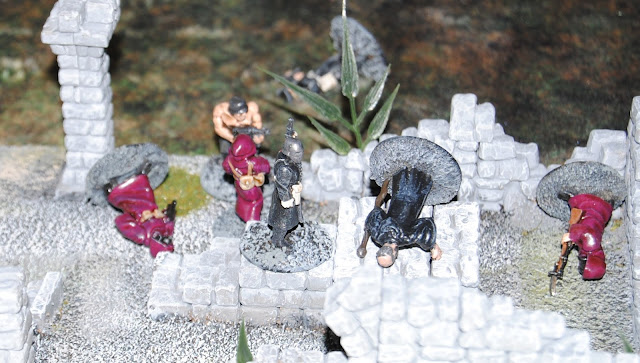 I have finally done a little housekeeping and posted my OHW AWI mods.  See the link or the link on the right.  I am collecting all of these documents into a new Google Site so they are easier to find and manage.  Enjoy!


2 comments:
Email ThisBlogThis!Share to TwitterShare to FacebookShare to Pinterest

Our oldest had her baby shower today, so of course I took the opportunity to play a game!  I used My cousin's husband (and my ex-college roommate) and their son as guinea pigs to do do a mini-playtest of my Astounding Tales! convention game "Death Temple of Sarnath" (see full description here)

We only had 3 factions, Doc Savage with his cousin Patricia Savage, Ham Brooks and Mnk Mayfair versus the cultists and a band of Arab Slavers.  I will post the full scenario, quick reference sheets and stats as I develop it.

It went quit well, and I made some design decisions to ignore some rules to streamline play:


Here are a few shots of the game, click photos to enlarge: 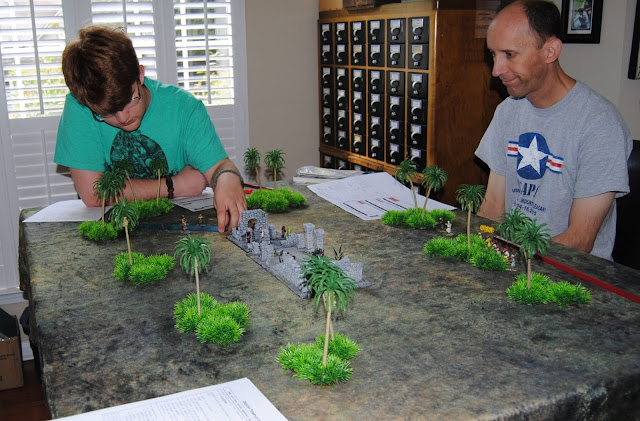 A bit better view of the temple with Shirley Uoff tied up, destined for a fate worse than death! 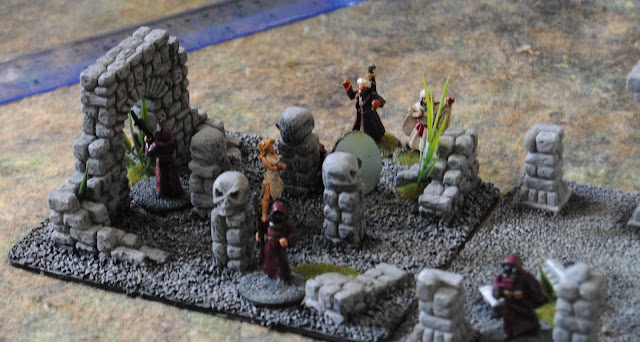 But then, Mustafa the Cunning arrives to rescue her, and deliver her to the slave markets of Zanzibar! 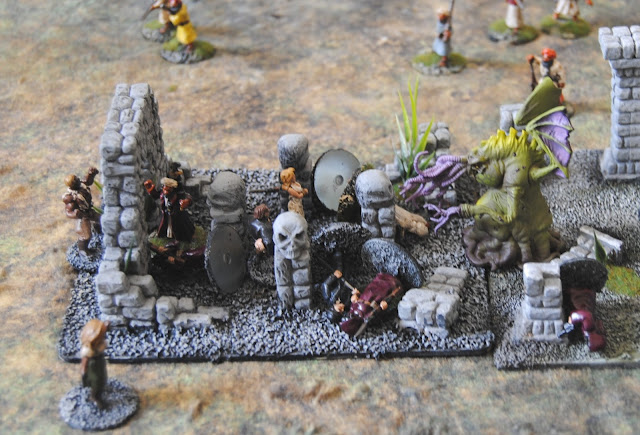 Chaos ensues as Doc and Mustafa trade savage blow for several turns, while much mayhem erupts as the cultists, slavers, and Ham and Monk vw for the girl.  Until Crowley's chanting stops and something MAN WAS NOT MEANT TO KNOW shows up. 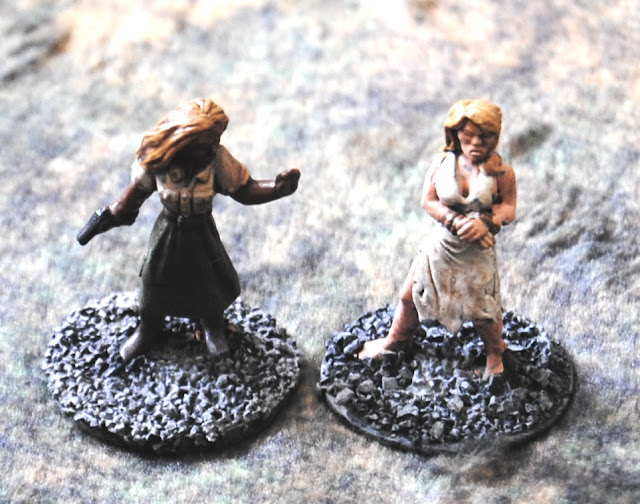 "Come with me if you want to live!"  Pat Savage manages to grab the heiress and spirit her away from the temple. 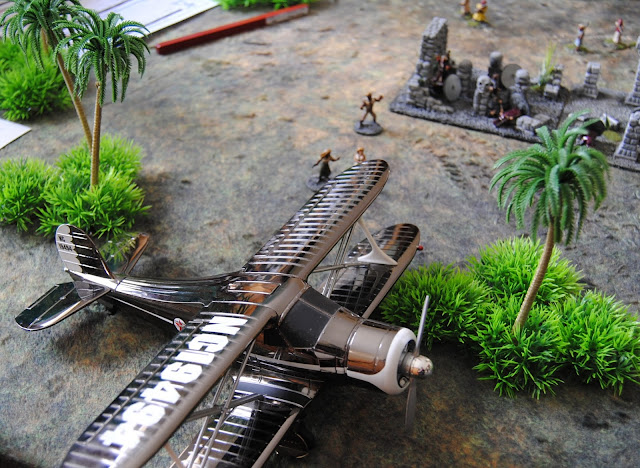 Just in the nick of time, Doc's plane arrives to carry the survivors off, we assume Monk grabs his best friend Ham and they make it to the plane. 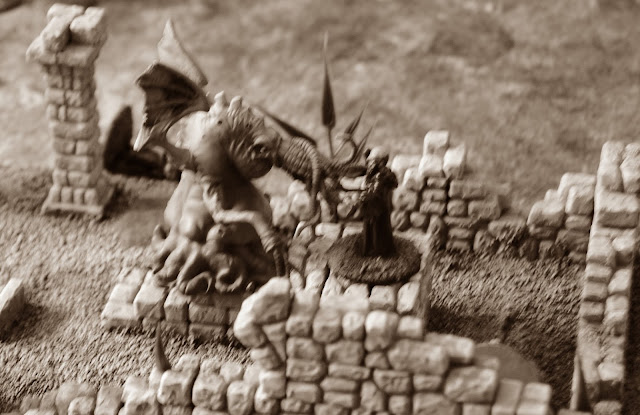 The last known photograph of Crowley, taken from Doc's plane as they headed back to NYC and some much needed rest.  Doc will need to do some research in his fortress of solitude to determine how to deal with this new threat.

Great game, and we actually got another in that afternoon with 2 additional players, so stay tuned to that report.  most important lesson learned: If you are going to throw a pig at Cthulhu and you expect it to explode, make some preparations first!

Apologies, I have been quiet for a bit.  Mrs. Tin Man and I took another cruise.  Nothing specifically militarily interesting, just sun, sand, steam room in the spa, and beaches.  Only two items of hobby note: 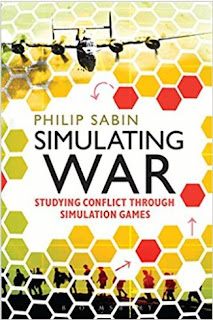 Meanwhile, I have gotten some great feedback on my Historicon post, I have just caught up with approving all of the comments.  Thanks for everyone who took the time to provide feedback and keep the conversation going.


Now for the important bit... I am also planning for Jozi’s Tin Man Winter Fall Tour 2017-18!!!!  As part of my promise to put my month where my mouth is, I have submitted games to the following upcoming events:


I will be running both of these games at each event (except MACE, where I will just run “Death Temple of Sarnath)  Keep checking the PEL’s for each event, but for Southern Front, I will run games all day Saturday, MACE Saturday from 6pm to Midnight, and I am trying to do all day Saturday at Siege of Augusta as well.  Additionally, I am looking at MACE West in March.  I figure after that, I will want to work up another game or games for 2018-19.

I am looking forward to comparing how miniature wargamers play versus the ones at MACE, which will be a higher percentage of RPG players.

“Trouble in Nyasaland, 1888”
Rules: The Men Who Would Be Kings (TMWWBK)
Players: 5
Description:
(Inspired by actual events, an expedition lead by Captain Frederick Lugard against the slavers in 1888)
Nyasaland in Central Africa is under the British sphere of influence and is suffering from the depredations of savage, aggressive tribes and Arab slavers who prey on the local population and are attacking missionaries and British trading posts in the Lake Nyasa region.
One such mission station is that of the Unitarian missionary Reverend Pimplebottom.  Word has reached British authorities that the good reverend, his beautiful daughter, Alice Pimplebottom, and a hunting party led by Sir Archibald Hastings are besieged in the mission by marauding Arab Slavers and brutal Anzique cannibals.  The local authorities immediately dispatch a rescue expedition made up of a detachment of the Central African Rifles and a landing party from the gunboat HMS Indefatigable.
Will the relief force make it in time?  Or will the besieged make a heroic breakout attempt? Will a dashing young British Army or Naval officer win Alice’s hand? More importantly, what will the Anzique eat for lunch?
Rules are fast play and absolutely no experience with the rules is necessary.

“Death Temple of Sarnath”
Rules: Astounding Tales 2!
Players: 8
Description:
It is 1934, and Shirley Uoff, daughter of Canadian millionaire industrialist Ronald “Rip” Uoff, has been kidnapped by gangsters! Rumors abound that she is being taken to Africa for some nefarious reason connected with notorious scoundrel, cad, and cultist Allister Crawley.  Rip Uoff has hired famed detective Hercules Poirot to assist the Royal Canadian Mounted Police in retrieving his daughter.
Completely coincidentally, the German Institute for Teutonic Studies (GITS) is sending an “Exploratory” Expedition to perform “anthropological” research in Africa.  Rumors of other terrible events have alerted Doctor Clark “Doc” Savage and local British Colonial authorities to potential trouble in the region.
Will Shirley be found and rescued? What is that rustling in the jungle? And more importantly, what is that thing with all the tentacles on its face?!?!?!?!?!
No experience with the rules is necessary, action will be fast and furious, bring your funny accent!

I have a long list of things I am prepping for running these games, and I have started with a homemade business card to give to participants: 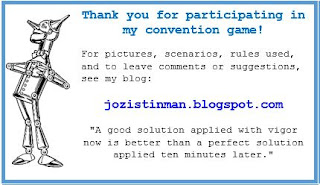 I am furiously preparing range sticks, QRS’s, extra terrain, etc, and I will post pictures as it comes together.  I will also get at least one or two play tests in, so stay tuned.  Let's see how well I can execute!