Finally got Lion Rampant on the table.  I have been reading the rules for months, and finally knocked out enough Wargames Factory Vikings to get a game on.

My opponent was my long suffering wife, Jozi, who is a HUGE Tolkien fan.  Naturally, she played Rohan while I fielded a dispicable goblin raiding party.  We played on a small 4 x 4 table with the following troops:


Goblins
The game was a hoot and we'll be getting it on the table more often.  She really enjoyed it.  I cannot wait for Dragon Rampant to come out in December!

Here are some pictures, enjoy! (apologies for the quality, was using our smaller camera) 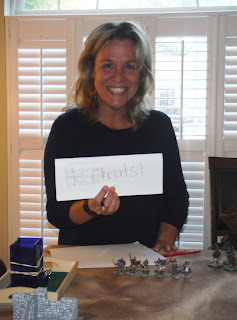 This is what my wife thinks every time I teach her a new set of rules, she wanted me to make sure the wargaming community got this message 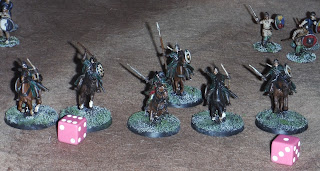 I opened by moving my Trolls forward with the intention of softening up the Riders and finishing them off with my Wargs.  Did not work out that way, here is her roll for her attack activation. 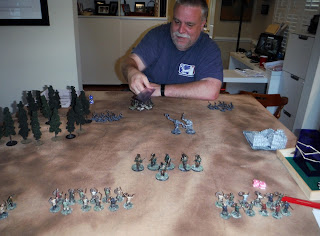 I plot my next move in the service of the Dark Lord.

After a few turns of combat, the initial clash left 1 troll dead and the other one fleeing off the table, also half of the riders were down.  I moved my warg riders up anticipating finishing ff the riders. 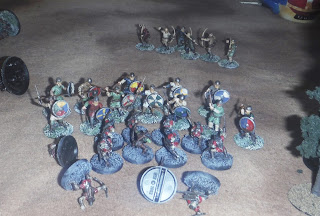 Meanwhile, she easily eats one of my goblin units, softening it up with the bidowers and charging with her infantry. 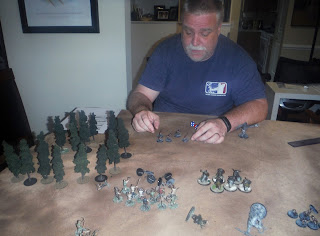 Things are looking bleak for me as soem fo my goblins flee.  I quiver at the thought of delivering bad news to Mordor. 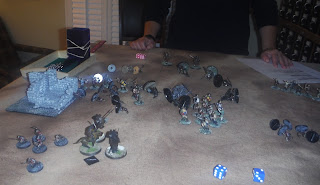 And here we see where she has cleaned up my other Goblin unit, and gutted my Warg Riders.  She did keep only 2 Riders of Rohan in action, but they never lost their courage.

Next game, I plan on bringing Mordor Orcs, who will act as Fierce foot.  I did think of a few modifications, that are probably already slated for Dragon Rampant, such as flipping the combat values for goblins.  Just does not feel right for them to be better on the defense than offence.

Still playing catch up on the blog, but I managed to get a game in with Tom at Borderlands about 4 weeks ago. He set up the whole things, with a really good looking cavern for the players to try to make their way through.

There was a really neat fog of war with the covered tunnel areas, and we were forced to explore most of it because we had to find the energy crystal left y a previously wiped out recon team to power the commo unit to call the retrieval boat.

He used a modified set of rules called Swatters by Ganesha Games.  It was a great set and the game played really well.  I think if I ever do a bug hunt game again, I will use these.  You maneuver fire teams and it really gives a good feel of pouring on massive firepower in a desperate attempt to stop the bugs.

Here are a few pictures, enjoy! 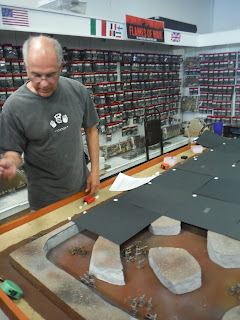 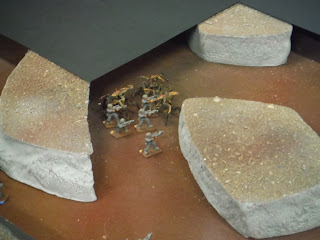 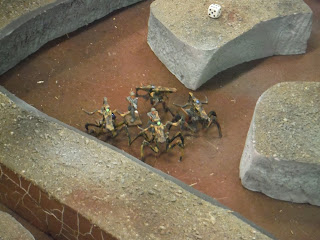 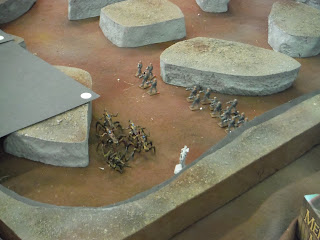 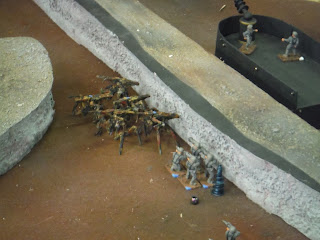