Here is my expedition, mustered for my Darkest Africa Punitive Expedition solo campaign.  I have decided for the first time out, I will be using The Men Who Would Be Kings with the "Skirmish Kings" option, basically half-sized units.

I am doing that so I can ease into the rules and play on my table in it's "small" configuration of 40" square.  My field force will consist of 24 points.  Troops will be pulled from regulars from the Zamunda Field Force, along with colonial volunteers and some locally raised askari to guard the baggage.

Here is the expedition in all its glory, including the supply train: 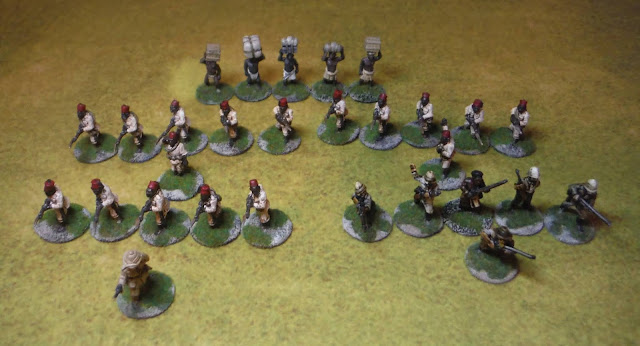 The force consists of:

I will post the opposition next.  Meanwhile, I have printed up some huts from Thingieverse here for villages.  They are being painted now but here is what the raw prints look like.  Enjoy! 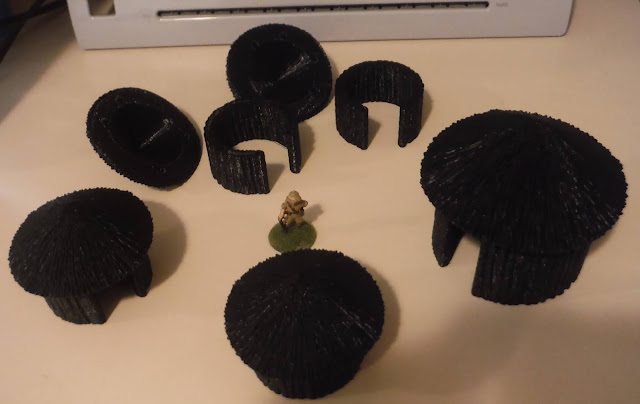 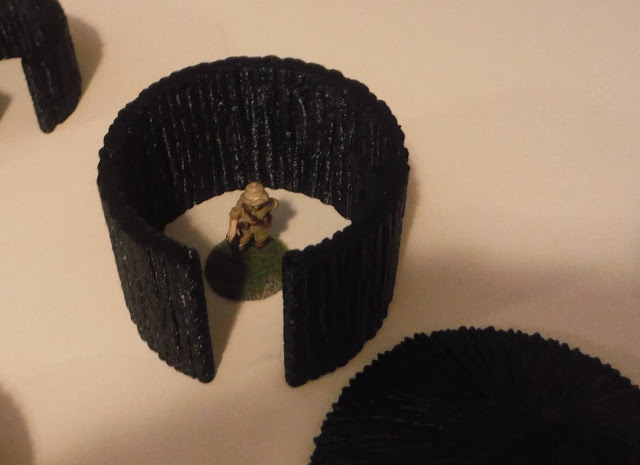 No comments:
Email ThisBlogThis!Share to TwitterShare to FacebookShare to Pinterest
Labels: 3D Printing, Colonial, Darkest Africa, The Men Who Would Be Kings

Getting severely distracted by work (boooooo!!!) plus my inability to focus on one hobby project at a time.

So, for your reading pleasure, here is my take on a solo Snakes and Ladders campaign in Darkest Africa.  I am going to try it out next week, let me know how you get on with it.  I am certainly jumping on the bandwagon here (I have acknowledgments in the document, but whoever came up with this first is brilliant.

The document is HERE 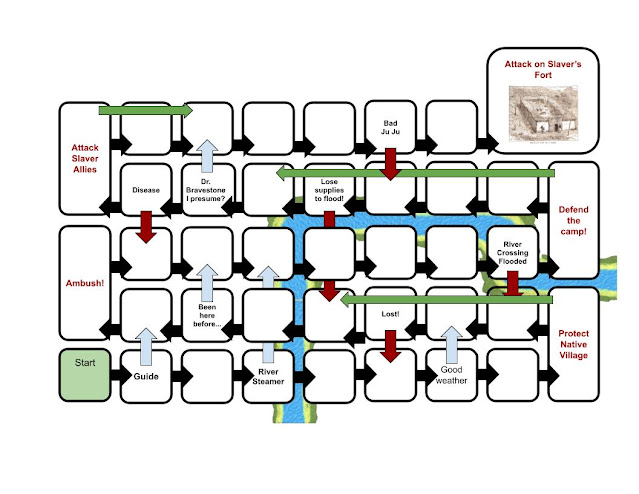 5 comments:
Email ThisBlogThis!Share to TwitterShare to FacebookShare to Pinterest
Labels: Colonial, Darkest Africa, The Men Who Would Be Kings, Victorian 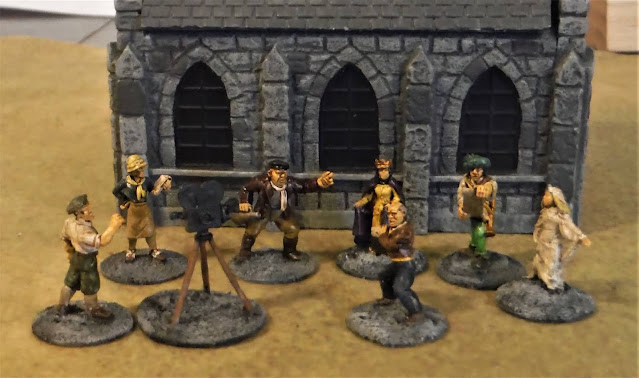 I have finally gotten around to painting up my Pulp Miniatures film crew.  And what is a film crew without some actors to film?  I added some old Mega Miniatures I had laying around.  Who doesn't love a historical costume drama?
No comments:
Email ThisBlogThis!Share to TwitterShare to FacebookShare to Pinterest
Labels: Pulp

I am working with Ivan on version 2 of Trench Hammer to bring it more in line with the current evolution of the Hammer system.  I am doing this VERY slowly, but I am plugging away.

Here is a game I played using the scenario "Somme Enchanted Evening" from Too Fat Lardies Play the Game Great War Compendium.  I cannot over-praise this tome, it is an invaluable resource, go but it now!

See the details of the historical action in Play the Game, but the basic scenario is this.  Ferocious French-Canadian troops attacking a village and a German support trench.  The terrain is no too badly cut up by artillery.  Germans start in dugouts in the trench except for a unit in the village.  French-Canadians need to clear the village and the trench.

Then Huns had:
As there had been some bombardment, I decided each german unit would have to roll a 4+ to exit its dugout after it had been issued an order point. 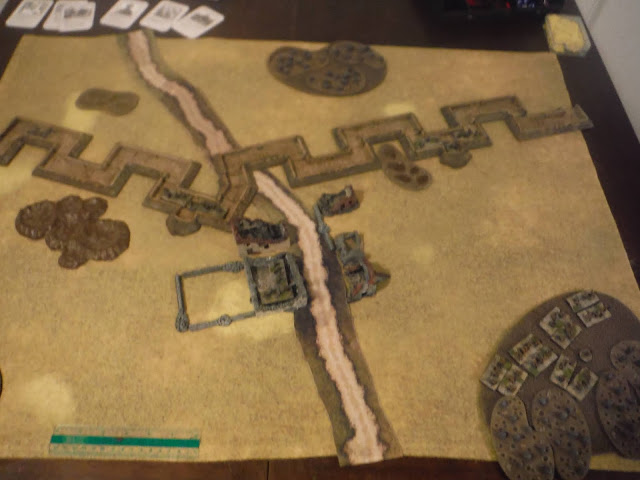 Here we see the German defenses, the French Canadians are jumping off from the wood in the lower right-hand corner. 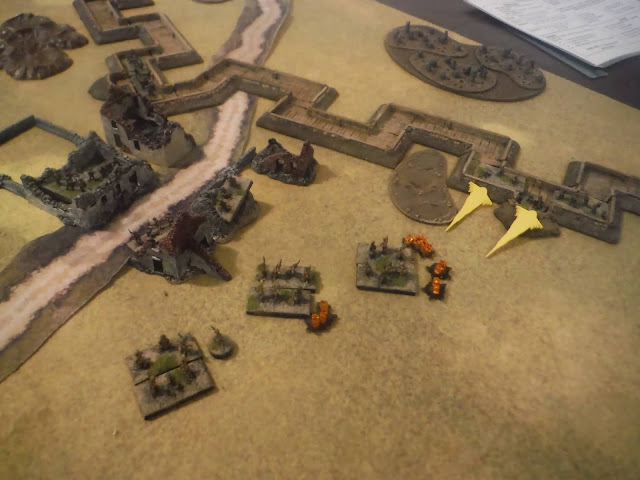 The end of turn 1 sees the Canadians caught in the open, every dies roll seemed to go against them.  They tried to Move Out with the assault squads to make it to the cover of the village, but only 1 squad made it. The Lewis Gun squad was left in the woodline to provide covering fire. On the German turn, every single unit exited the dugouts and took up firing positions... it was an uncomfortable turn for the Canadians. 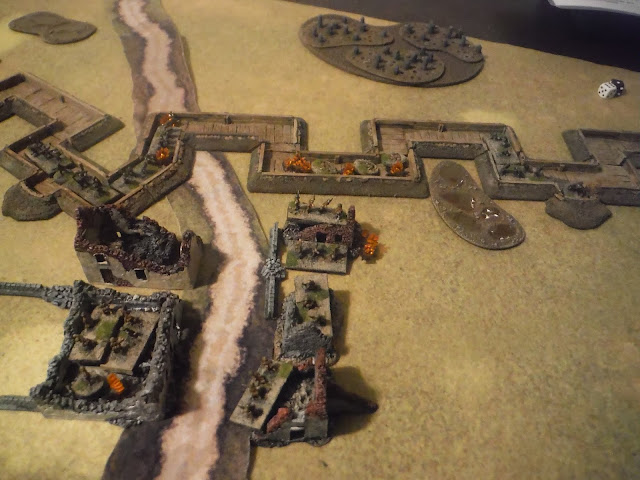 The next turn was evenly split, the Canadians drove the rifle squad in the village back to the trench line to lick its wounds, and one of the squads that had been caught in the open successfully forced its way into the trench.  But was so badly battered by crossing the open in front of the Maxim gun and the assault, that the hun sat back and threw grenades over the traverse, knocking them out 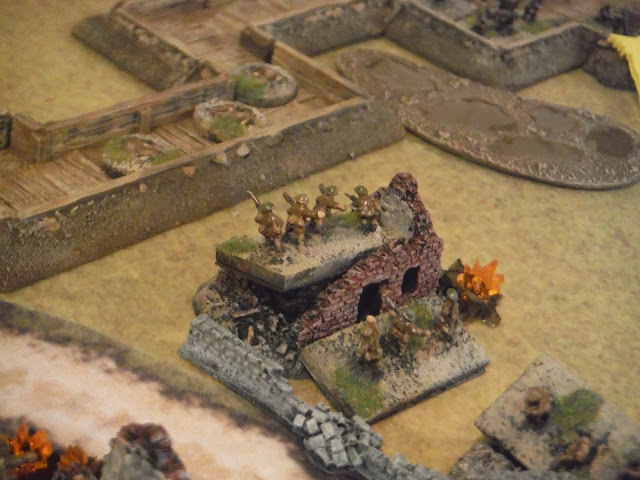 The following turn, another squad gets ready to try to force itself into the trench. 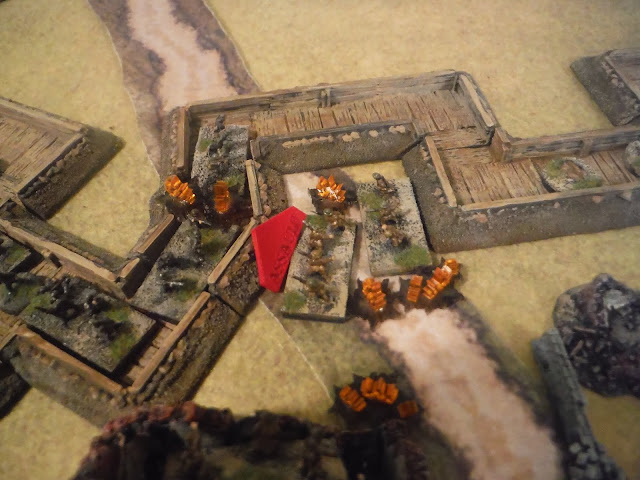 And is driven back 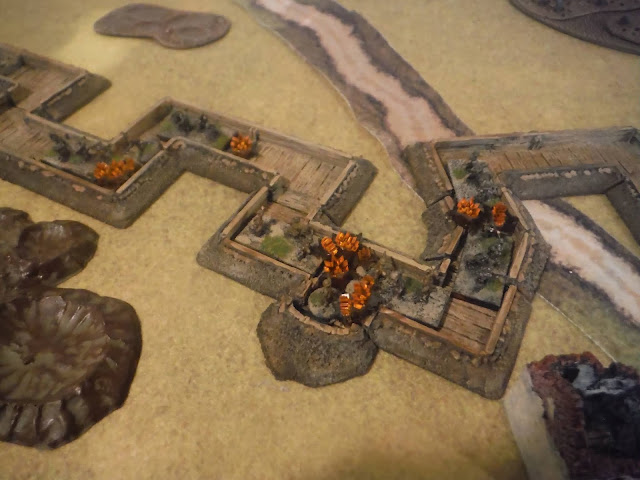 Here is the final Canadian push, with the platoon leader leading the charge. Only to be met by a flurry of grenades from 2 sides, knocking them out.  By this time the Canadians did not have enough combat power to win so I called the game.

My biggest mistake with playing the Canadians was not coordinating attacks and sending the assault squads in one at a time to be eaten piecemeal.  That would have mitigated the ability of Bombing squads to attack enemies down a trench with no immediate risk to themselves.  The game lasted 4 turns and gave I think a realistic result.

I am still tinkering some expect more of these battle reports!